Last year Kingsbridge Town’s bowling green at Eastern Backway was so badly affected by sewage contamination and drainage problems that it was decided to completely relay the rink. Club Chairman Ray Lancaster took on the job of project manager and spent many hours in raising the money and organising the work required. This involved re-levelling the green and bringing in and compacting approximately 280 tonnes of new topsoil.  The opportunity was taken to provide an automatic irrigation system. Specialist contractors were employed to carry out the main levelling works  but at least 15 club members were involved in making the park safe, erecting the new retaining boards, laying land drainage, providing new ditches and the erection of the tank and pipelaying required for the irrigation system. Ray Lancaster and Club Captain Keith Brayne need a special mention as they were on site for the whole fortnight and made a great management team. The club is also grateful to all the other members who put in their time and effort. The green will now be left for a month for any differential settlement to occur. It will then be regraded and seeded in time for next season.

In order to carry out the work it was necessary to fence off part of Duncombe Park as this is the only vehicular access to the site. Matting was also provided to avoid damage to the grass surface. Members marshalled the park to protect the public.

The whole scheme was carried out in 2 weeks due to everyones efforts.

During this time,  Duncombe Park was kept open and the club would like to thank the users of the park for their forbearance and also for their interest in the project.

The first job was to excavate for and position the irrigation tank. Members are finalising the placement prior to lockdown in 2020. 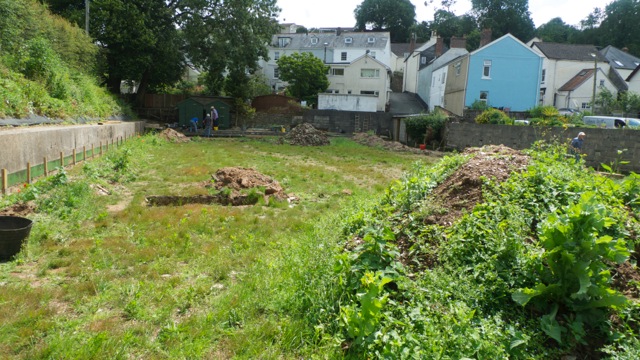 This was the state of the green after lockdown. The pile of earth was excavated to make way for the irrigation tank and it became overgrown during lockdown. 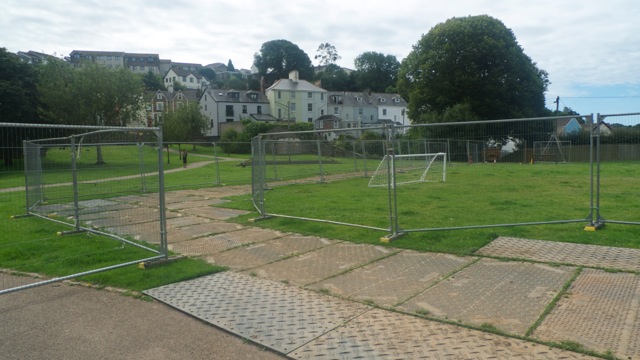 After lockdown Duncombe Park needed to be made safe for the public and matting was placed and fencing erected.